The Golden State Warriors crumbling dynasty was dealt another jackhammer blow on Wednesday when superstar Stephen Curry suffered a broken hand against the Phoenix Suns.

Curry sustained the injury with 8:31 left in the third quarter as he drove to the rim and collided with Suns Aron Baynes in a one-sided 121-110 loss to Phoenix.

“Stephen Curry has a broken hand,” the Warrior public relations department confirmed in a tweet.

Baynes ended up landing awkwardly on top of Curry, who stayed on the ground for a few moments holding his wrist and then got up and tried to shake off the pain.

He attempted to stay in the game before the Warriors called a timeout and Curry walked over to the bench and left for the locker room with the Suns dominating on the scoreboard.

The loss of Curry for an extended period now leaves the Warriors as a shadow of their recent championship teams.

A mix of superstars, supporting cast, coaching and championship experience had made the Warriors the strong pre-season favourites for the past several seasons.

Even before Curry got hurt, Golden State was already without departed Kevin Durant and Klay Thompson, who is injured and likely out for the entire season.

Their bid for a third straight championship and fourth in five years was dashed last season when they lost in the NBA finals in six games to the Toronto Raptors.

Curry finished with nine points and six assists in 21 minutes of playing time.

Devin Booker scored a game-high 31 points and Baynes finished with 24 points and 12 rebounds for the surprising Suns who are off to a an impressive 3-2 start to the season.

The Houston Rockets may have exited the NBA playoffs at the hands of the Golden State Warriors for the fourth time in five years, but owner Tilman Fertitta insists they will win titles with James Harden on their roster.

Stephen Curry’s 33 points on Friday helped the Warriors to a 118-113 victory in Game 6, which sealed a 4-2 series success for Golden State and sent them through to the Western Conference Finals.

The Warriors, seeking a third straight NBA title, have proved a thorn in Houston’s side in recent seasons and Fertitta was quick to praise Steve Kerr’s men for once again getting the better of the Rockets.

However, he is also adamant that 2017-18 MVP Harden can end a title drought for his franchise that dates back to the 1994-95 season.

“They kicked our a** on our home court,” Fertitta told reporters.

“They beat us by 10 points in the fourth quarter. It’s unacceptable. We just have to be better. 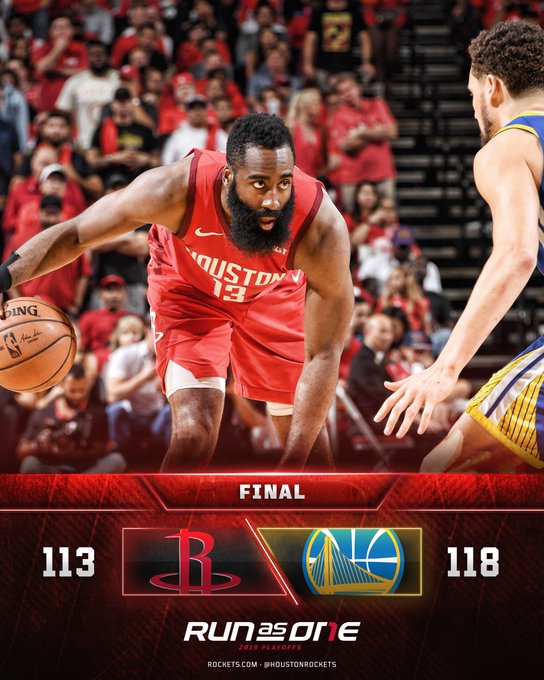 “I can promise you, we’re going to win some championships with James Harden, because we are not going to sit here. We will go to battle every year.

“We’re going to have a strong offseason, and we’re going to do whatever we can to be a better team. We are not going to sit on our hands, I can promise you that.”

Houston had lost the first two games of the series but brought it back to 2-2 before losing Game 5 on Wednesday, when they led in the fourth quarter only to be defeated 104-99 at Oracle Arena.

Fertitta felt that was a missed chance but maintains belief that his team will one day avenge all of their playoff losses to the Warriors.

“They showed why they’re the champions,” he added.

Los Angeles overturned a 31-point deficit as the Clippers completed the biggest comeback in NBA history at Oracle Arena on Monday.

The Clippers – who trailed by 31 points with just over seven minutes remaining in the third quarter – eclipsed the previous record set by the Los Angeles Lakers, who rallied from 29 points down to top the Seattle Supersonics in 1989.

Los Angeles cut into the deficit and eventually tied the score on a jumper by Lou Williams with a little more than a minute to play in Game 2.

Warriors star Stephen Curry answered with a three-pointer on the next possession before Williams knocked down another jumper and Landry Shamet connected on a clutch three-pointer to put the Clippers ahead by two with 15.9 seconds to play.

Montrezl Harrell followed with a pair of free throws to seal the victory and even the series at 1-1.

Meanwhile, the Philadelphia 76ers levelled their Eastern Conference series with the Brooklyn Nets thanks to a 145-123 win at home in Game 2.

The 76ers used a 51-point quarter to beat the Nets – which tied the NBA playoff record for most points ever scored in a quarter.

Ben Simmons produced a triple-double of 18 points, 10 rebounds and 12 assists, becoming just the third 76ers player to record multiple triple-doubles in the playoffs.

The 76ers also set a franchise record for points in a postseason game – eclipsing the previous mark of 141 against San Francisco in 1967.

Williams led the Clippers with 36 points and 11 assists away from home.

Joel Embiid totalled a game-high 23 points and 10 rebounds for Philadelphia amid his knee problems.

Warriors forward Andre Iguodala was two-of-six shooting and missed four of his five three-point attempts in his team’s loss. He was a minus-1 for the game.

Ed Davis followed up his double-double showing from Game 1 with two points and one rebound in just six minutes of playing time.

Beverley with the dunk!

Patrick Beverley with the steal leading to a dunk from Danilo Gallinari.

Jarrett Allen reached up high to catch this pass and finish an emphatic alley-oop slam.
Magic at Raptors

The Orlando Magic secured an unexpected win against the Toronto Raptors in Game 1. The Raptors have been one of the favourites to win the Eastern Conference all season, so they will need to respond and play at a much higher level on Tuesday.

Ben Simmons hit out at the boo-boys after he was the target of the fans’ jeers in the Philadelphia 76ers shock loss to the Brooklyn Nets on Saturday.

The Sixers fell to a 111-102 defeat in Game 1 of their Eastern Conference round one playoff series despite being heavy favourites on home court.

It was a particularly tough evening for Simmons, who had just nine points and seven rebounds, and was loudly jeered after a missing a three-throw in the third quarter.

After the disappointing setback, a frustrated Simmons took aim at the dissenting voices.

“If you are going to boo, then stay on that side,” he said.

“That is how you feel. If you are a Sixers fan and going to boo, stay on that side.”

Team-mate Joel Embiid was reluctant to criticise the fanbase but says he can understand why some players would take exception.

“I love the fans and I never say anything about them. They show us love. It’s understandable. They come in, they pay a lot of money, they want the game to be entertaining. They want to watch us win so I understand why they boo,” Embiid said.

“But the fact that it’s after every single miss, when shots aren’t going to fall. Tonight they didn’t fall, but for me, I’m fine. I’ll play through anything.

“But for some guys it’s annoying. It can be annoying. It’s like every missed shot, you get booed so you get the next one and it’s kind of like, ‘should I shoot it or should I not because I’m about to get booed?’ I don’t know. Some guys are like that. It’s hard. I think we all got to do a better job.”

Jimmy Butler had no qualms with Simmons’ comments but can understand the fans’ discontent.

“I guarantee if we’re winning, they’re not booing, so that’s the way to change it.”

Stephen Curry reflected on a “pretty special” achievement after surpassing the legendary Ray Allen to become the NBA’s all-time leader for postseason three-pointers.

The superstar point guard was in top form as the Golden State Warriors earned a 121-104 victory over the Los Angeles Clippers in Game 1 of their Western Conference first-round series at Oracle Arena.

Curry trailed Allen by seven heading into Sunday’s encounter and drained his eighth in the third quarter to take his postseason threes to 386.

It has taken Curry just seven trips to the playoffs to break the record, in comparison to 11 for Allen, and he was in buoyant mood.

“That’s pretty special. I mean, I always talk about longevity and the all-time great shooters. Ray Allen, Reggie Miller – anytime we can pass them in the record books, it’s pretty special,” Curry said.

“The way I play, the shots I take, obviously have confidence every time you rise up, but to be in the same category and to pass a guy like Ray Allen and all the iconic moments he’s had in playoff games and Finals games and all that type of stuff, it’s pretty surreal.

“So [I’m] definitely honoured and grateful for those opportunities. I always joke, though: I shoot a lot of threes. I’d better make a lot of them.”

Warriors coach Steve Kerr was astounded by the achievement of Curry, who had 38 points, 15 rebounds and seven assists.

“That’s remarkable, given that he’s kind of right in his prime,” he said. “He’s got a lot of years left.”

Golden State forward Draymond Green believes the argument over who is the greatest shooter in NBA history has now been closed.

“I don’t think there’s much argument when anyone says he’s the greatest shooter of all time,” Green said.

“I don’t know if you can find many people to argue that.”

Green stepped on the foot of Warriors team-mate DeMarcus Cousins in the second half on Saturday and the three-time NBA All-Star headed to the locker room soon after.

The Warriors then announced Green – who had to be helped up and off the floor – would not return against the Rockets.

Green is averaging 7.2 points, 7.5 rebounds and 7.3 assists for the reigning champions this season.

The Warriors came into Saturday’s game with a 42-16 record and top of the Western Conference following the All-Star break.

The Pelicans will sit Davis in the matchup to give him rest, New Orleans announced before the game.

Los Angeles attempted to acquire NBA All-Star Davis before this year’s trade deadline after his agent Rich Paul notified the Pelicans he would not sign an extension.

However, New Orleans decided to retain Davis for the rest of the 2018-19 season.